Wow it got dusty in here! Work & Life, you know how it goes.
Anyway, it has been twin heartbreak UPL seasons (second place both times by a whisker and losing the lead on the last day)...and I know that hoops are on the front burner now, but spring training is coming around the bend. Plus, Im bored, so I looked up my final UPL roster and projected my keepers for a little UPL hot stove action!!!
Turns out, it wasnt really that difficult. Of course, this is all subject to change, and more to the point, I am open to wheeling and dealing to the few of you who will actually read this note.
Here goes:
1B Gaby Sanchez -- should benefit from Marlins' spending spree. Lots of men on base we hope.
2B Brandon Phillips
3B Alex Rodriguez
SS Jose Reyes -- who knew I'd have the best SS in Miami??
OF Jose Bautista
OF Jason Heyward -- I'll be sticking with him to the bitter end after what I gave up to get him
OF Emilio Bonifacio -- yeah, those 40 SB and the boppers behind him look pretty enticing
U Ben Zobrist
U Chris Young
B Lance Berkman -- subject of a much ballyhooed deadline deal...I think it would almost be justice to send him back to the draft, because he pretty much shit the bed for me after I got him anyway.
Missed the cut (for now)
* Delmon Young -- his late-season heroics have me seriously doubting this decision. I think in the end I will try to find a way to get him into my required 18.
* JP Arencibia
*Vernon Wells -- his OBP really sagged last year.
On to my soon-to-be dominant pitching staff
P Heath Bell
P Craig Kimbrel
P Carlos Marmol -- can you say 120 saves from 3 guys? Yeah, I think you can.
P Roy Halladay
P Jered Weaver
P Jhoulys Chacin -- my #1 draft pick from last year showed some flashes. Not ready to give up.
P Jaime Garcia -- been very good to me since I picked him off waivers 2 years ago.
P Kenley Jansen -- LAD closer situation is muddled, but he has the stuff.
Missed the cut
So far none of my legit pitchers missed the cut.
****
My thoughts are that I need to make a move for some younger power hitters, which of course is the hardest type of player to get. My team is fast. Really fast. Lots of steals and runs (and hopefully AVG), which has always been my main 5x5 roto philosophy anyway. I would say a package involving some saves and maybe a Berkman can probably net me the type of player I'm looking for.
My team is all growing old together after a few years now, so maybe it's time to shake some things up.

Looking forward to comments and/or trade offers. Everyone's got a price. Happy New Year.
Posted by Pauly at 12:38 PM 1 comment:

The results are in...

Yes sports fans, two drafts have now been completed by yours truly...including my first NL Only live auction.

Obviously, I favored the top 4 hitters of the Marlins (HOMER!)...but I also have a lot invested in the Cubs and Dodgers. I am using the middle reliever theory, meaning I am likely punting wins for a big increase in WHIP, ERA and saves (I think at least 2 of the MR I have will be closers by the end of the season). 50 saves was enough for fifth place in saves last year in this league, and I have basically locked up every LA Dodger save with this team, which should be in the 45-50 range by itself. Once Heath Bell is traded(?) or Joel Hanrahan is traded or stinks, and Ryan Franklin finally starts to decline, Gregerson, Meek and Motte will be collecting saves as well.

I project to be the No. 1 team in HR (an escape for me), middle of the pack in steals and runs; and near the bottom in average. My goal will obviously be to try and trade for a high-average stolen base guy using my excess power numbers.

I would also love to trade one of my minor league prospects for a better SP. My biggest hope is that Belt opens the season in the minors, and is called up mid-season with a splash, at which point I will probably try to trade him.

I may have been overprepared for this auction. How'd I do? I'll post my mixed league team later.
Posted by Pauly at 9:50 AM 1 comment:

As an effort to spur offseason activity in the UPL baseball league, I am posting my roster of potential keepers just to make you guys jealous.

Of course I would love to make a deal or two...

If you want to pull up your own UPL roster, just go to your yahoo fantasy profile and pull up last year's team. If you need to plug a hole at first base, I might be able to help you out!

You Make the HoF Call

What do the following players have in common?

That’s right, they will be on the official baseball Hall of Fame Ballot this season.

So let’s make you guys (and me) the electors. Here are the rules, straight from the BBWAA:

A. Electors may vote for as few as zero (0) and as many as ten (10) eligible candidates deemed worthy of election. Write-in votes are not permitted.

B. Any candidate receiving votes on seventy-five percent (75%) of the ballots cast shall be elected to membership in the National Baseball Hall of Fame.

So who are you nominating? Here’s my ballot:

If I get enough ballots (more than 2?) I will tally up our HoF selections. So, COME ON COMMITTEE!!

Lots of former Marlins on this list….there are 8 -- can you name them?

I’ll save you the trouble:

It is uncanny. I go ahead and vent my bellyaching for the Marlins trade of Cameron Maybin and what do they do?

Of course, they one-up me.

I think we just found #11 on the list in my previous posting. Holy cannoli!

It's hard to ascertain what the Marlins are doing here. They just traded their CF and 2B for three relievers and a utility infielder for heaven's sake....but there may be a silver lining on this very dark cloud (more on this in a second).

First, I understand the reasons why the Marlins needed to trade Uggla away. Forget the fact that he is the club's all-time home run leader, because he refused a decent $48 million offer from the Marlins earlier this offseason. Yes, Florida had to get some kind of return on investment -- and as a my good friend Adam reminded me yesterday, the Marlins got Uggla for nothing way back in 2005 in the Rule 5 Draft.

But Omar Infante? I'm not a fan. In his last five seasons with Detroit and then Atlanta, he has averaged 88.8 games played per season. Forget his ridiculous all-star selection last season -- this guy is simply a career backup infielder (8 years worth of being one, too) who has played well recently -- although his defense is extremely suspect. In 29 games as a third baseman (the position he projects to play in Florida), he committed 30 errors last season. Yeah -- that's more than one error PER GAME.

Dunn offers the Marlins some much-needed bullpen help; however, did they not just trade away their prospect center fielder for two relief pitchers?

It has been a fast start to the hot stove season for the Marlins. Not only have they made two pretty awful trades, but they also spent $18 million for three years on a middle-of-the-road catcher, John Buck, who probably could have been signed for half that amount. Sure, Buck hit 20 homers last season for the Blue Jays -- but guess what, he isn't going to do that next year in spacious Dolphin Stadium...although I suppose the new ballpark would be more suitable to his power.

The Silver Lining
Everything above has been undoubtedly bad for the Marlins so far. Some people on the message boards are calling for an official intervention! However, there is some good news....

First, assuming Infante is placed at third base, Chris Coghlan will move to his natural position of second base for next season. This is great news for his fantasy owners, because Cogs' production was middling at best for an OF, but should be above average production for a second baseman.

Right now, Florida does not have a center fielder (unless you count the god-awful Emilio Bonifacio).........is it even remotely possible that the Marlins are clearing some payroll and roster space to make a run at Carl Crawford? This is total speculation on may part, but it kind of makes sense. If you are going to trade your power-hitting second baseman to a division rival and dump your center fielder for some bullpen help in the same week....it may be just a setup for a huge maneuver.

Then again, this IS the Marlins I'm talking about.

They are definitely depending A LOT on Stanton in this lineup. But once again, the Marlins would have a very young, competitive squad that is just not quite good enough to compete with the Phillies, Mets and Braves.
Posted by Pauly at 9:18 AM No comments:

Hey all, I know it's been a while.

On the heels of the news that the Florida Marlins have traded Cameron Maybin and Andrew Miller for three minor league relief pitchers in two separate deals, I had to post a comment.

This brings one of the worst trades I can remember full-circle: Miguel Cabrera (best Marlin ever) and Dontrelle Willis (one of the best Marlins pitchers ever) for Maybin and Miller.

For a fervent Marlins fan like me, this is the worst trade in the last 25 years.

So, knowing the boys over at the rotojunkie.com forums, I challenged them to come up with worse trades than this one in the last 25 years. I knew they would come up with some doozies:

My post: “So I'm gonna go ahead and call the Miggy Cabrera/Dontrelle Willis for Andrew Miller/Cameron Maybin the worst trade in the last 25 years in baseball.


Personally, I'd say #5 and #7 are the most egregious. Still, no trade breaks my heart more than the Miggy Cabrera deal. 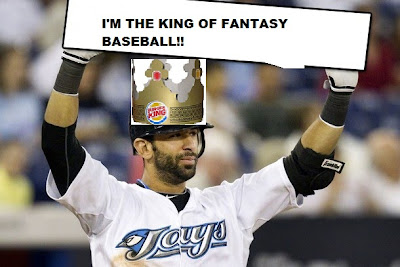 Top 10 Fantasy Players Who Might Get Traded
Posted by Pauly at 4:02 PM No comments:

Grading the Rookies
Posted by Pauly at 11:45 AM No comments:

First-Half Offensive MVPs, Goats and Waiver Wire Studs
Posted by Pauly at 11:58 AM No comments: